We were slightly later holding the event this year, but it was pleasing that arrangements could still be made for the month of July. Our venue was once again Lincoln University and the two course buffet was enjoyed by all. 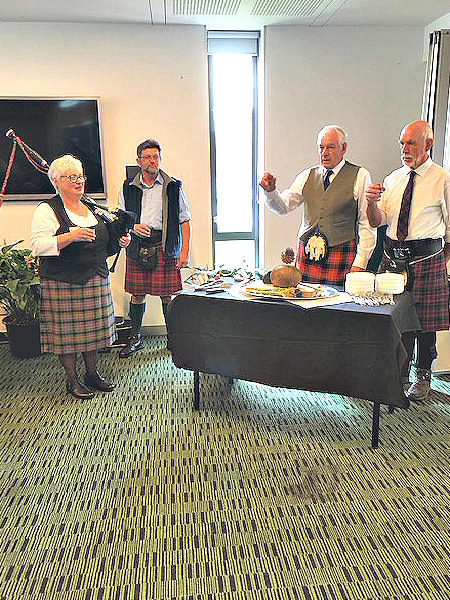 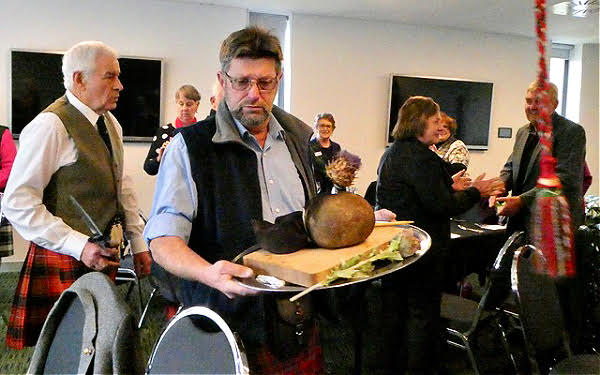 Gordon McIvor and Ian Grant during the procession of the Haggis Party.

Each year we have an activity to complete, that involves all at the various tables, and provides an opportunity to create fun and laughter. This year we had to write a story made up of set bagpipe tunes. All entries were excellent so all were winners. Below is an excerpt from Clan Donald. The tunes are in italics.

Alex C McGregor was Up early in the Morning, to go to Marie’s Wedding at Borve Castle. The Eavesdropper heard The Men of Argyll under The Old Rustic Bridge fixing Paddy’s Leather Breeches. Old Hag You Have Killed Me said The Black Bear. Golly, The Ale is Dear. The Balmoral Highlanders were singing The Flower of Scotland as they entered the church. Lady Carol, mother of the bride was The Rose Among the Heather as she tripped into The Waters Of Kylesku. The Piper of Drummond played Hail to the Chief as Marie was piped out of the castle. Everyone was told to Have a Dram Before You Go. 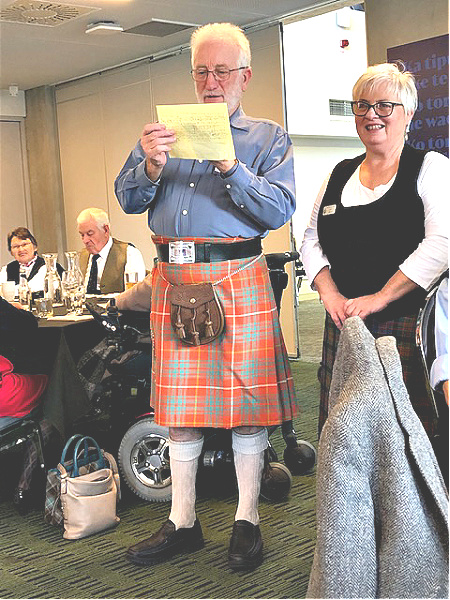 Dave Gibb of Clan Cochrane reading out his story with Ann Smith.

Christine Toner of Clan Johnstone reads her story to the gathering.

The following announcement is from Major Bruce W Macdonald, Ret’d, the Chamberlain to The High Council of Clan Donald, Armadale Castle, Isle of Skye, Scotland. 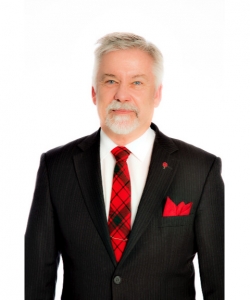 “It gives me great pleasure to announce that the High Council of Clan Donald has accepted the nomination of Mr Andrew Wilkie of Auckland, New Zealand and has agreed to appoint him as Their High Commissioner for New Zealand.

The High Council is confident that all Their good Clansmen and Clanswomen of Clan Donald in New Zealand, its Septs and Adherents will acknowledge reverence, honour, and obey the said Andrew Wilkie. Furthermore, the High Council expects their other High Commissioners, Clan officers and officials, and good clansmen and clanswomen throughout the world, its Septs and Adherents to assist Andrew in the conduct of his duties.

The High Commissioner Alan MacDonald has also made the following announcement.

It gives me great pleasure to announce that our nomination of Andrew Wilkie has been accepted by the High Council and Andrew has been appointed High Commissioner effective 1 July 2020.

I am sure you will join me in congratulating Andrew and giving him your support and assistance.

It has been a pleasure to be High Commissioner and I have very much enjoyed working with you all for the benefit of our great Clan.

A special thank you to my 2 Commissioners, Elwyn and Tom who have assisted me during my 2 terms.

A group of Clan Donald Hawke’s Bay members met for lunch on Saturday the 7th of March at the well known Patangata Tavern in Central Hawke’s Bay.

The Patangata Tavern is regarded as one of the best places for a fantastic lunch in Central Hawke’s Bay. As it is such a favourite we booked well in advance, and the people who own the Tavern are relatives of Clan Donald Hawke’s Bay member Bruce Parker. This didn’t mean that we got any better service as the Tavern has a reputation for looking after all customers.

The Clan Donald members came from Napier and Hastings, Waipukurau and Waipawa as well as Dannevirke. This gives an indication of the spread of the membership of Clan Donald Hawke’s Bay.

Even as it was a bit of a blustery Autumn day, everyone enjoyed the lunch and had a chance for a good chat.

All too soon it was time to return home. 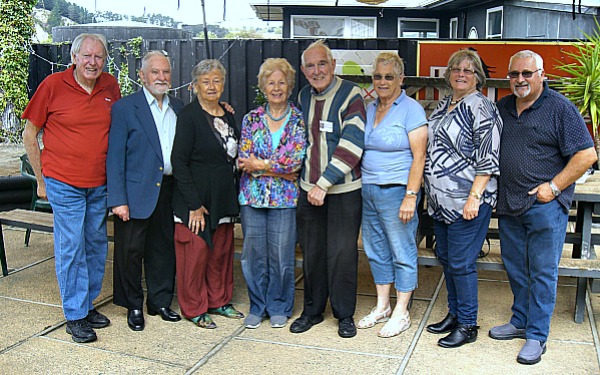 After lunch we had to have a group photograph. From the left. President Bruce McGechan, Don Ellis, Jill Macdonald, Halina McGechan, Doug McGechan, Glennis McDonald and Secretary Ruth Parker and Bruce Parker.

A small but very keen group of Clan Donald Hawke’s Bay members gathered for the first event of the year. This was held at Bruce and Halina McGechan’s   residence in Waipawa in Central Hawke’s Bay, on Saturday the 22nd of February.

After putting the final touches to the pavilion, it was time for a break, and although it was slightly overcast it was very warm, so everyone relaxed with a cool drink.

Around 10.30am it was time to start the competition. There were three teams made up as follows: The McGechan Team of Bruce and Halina, The Parker Team of Ruth and Bruce Parker, and the Ellis Team of Don Ellis and Doug McGechan. 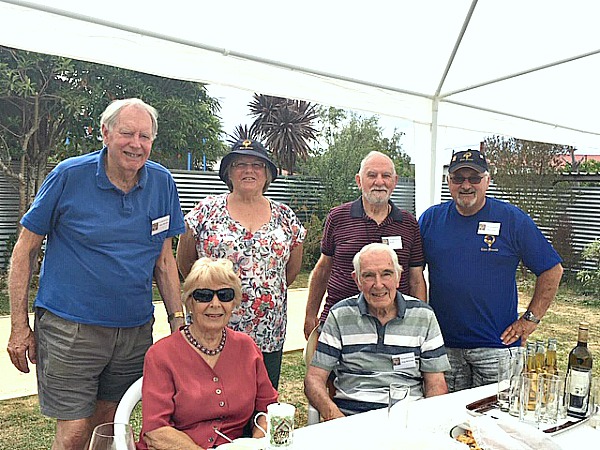 Each team selected which boules they would use, and the first game was between the McGechan and Ellis teams, which was won by the McGechan team. 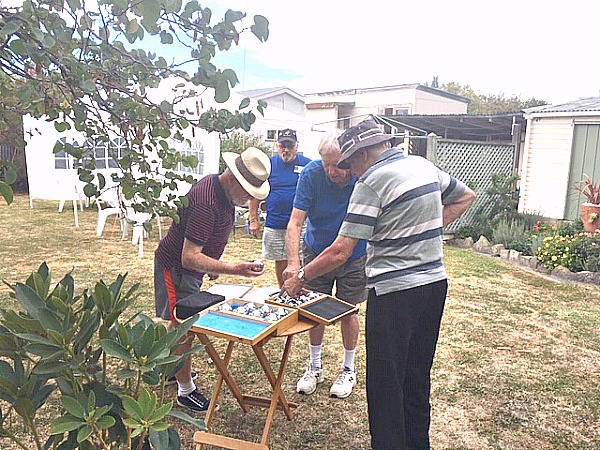 Don Ellis, Bruce Parker and Bruce and Doug McGechan selecting the boules for their teams. 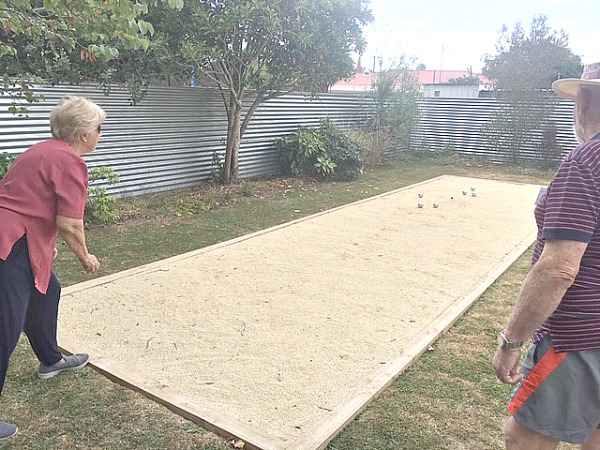 Halina McGechan about to play her third boule while being watched by Don Ellis. 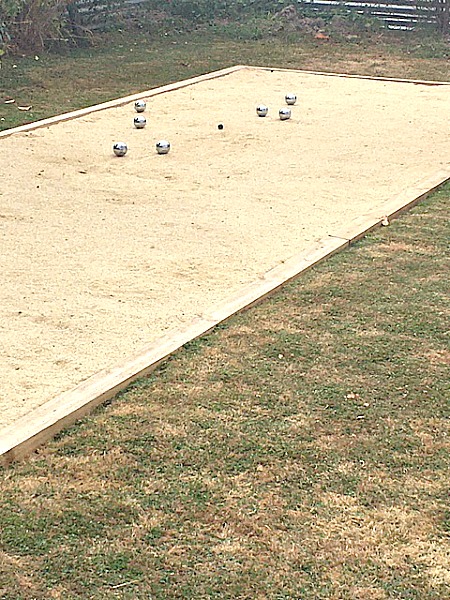 Halina’s third boule was still no closer than her first boule.

It was jokingly suggested that Ruth must have been practising a lot, as she was so accurate during the game. She placed her boules so close to the jack, blocking the opposition, and also knocking away the opposition boules. She was a natural being so consistent throughout the competition. 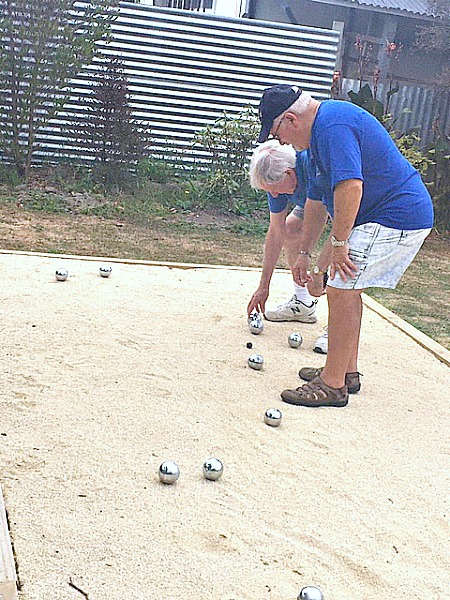 Bruce McGechan and Bruce Parker checking that the Parker team had well and truly won the game. 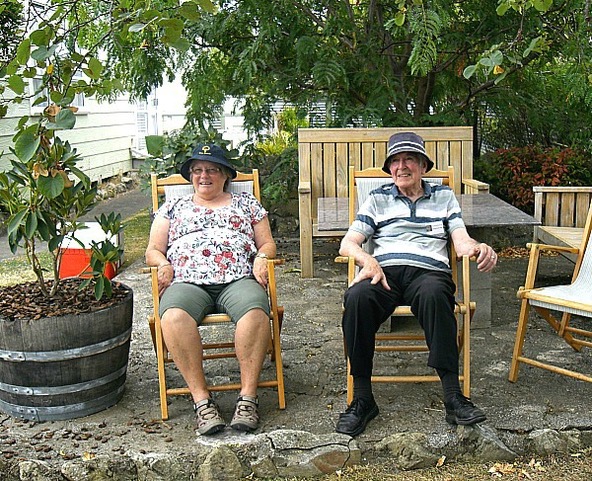 Ruth Parker and Doug McGechan watching the games from the shade.

After a couple more games everyone enjoyed some refreshments before lunch. 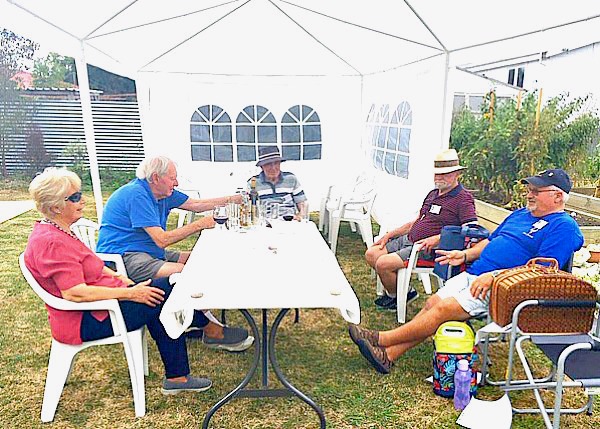 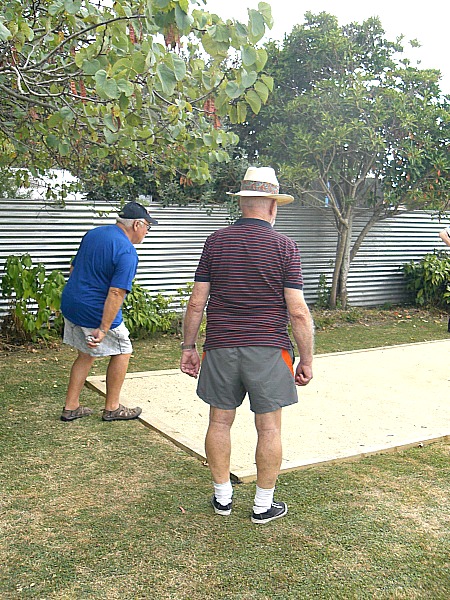 Don Ellis on the right, carefully watching Bruce Parker about to throw his third boule. 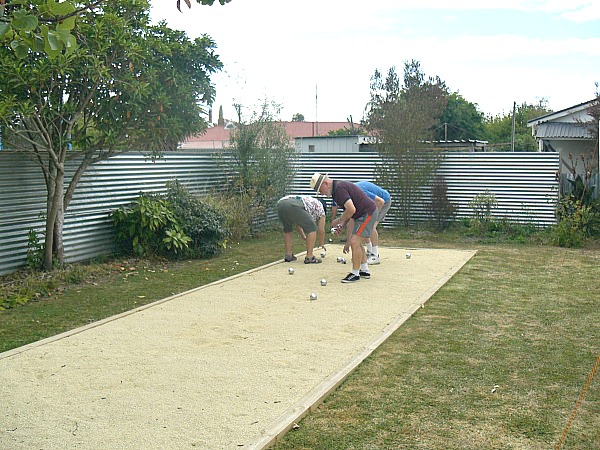 The boules being cleared away after the last game.

The winner of the Petanque Competition was the Parker team, which was no wonder with Ruth being such a natural player. Second was the Ellis team and of course the McGechan team was last.

Afternoon tea and coffee was served, as well as other refreshments, and then the winning Parker team were presented with a couple of bottles of sparking wine. One bottle was opened immediately, and everyone drank to a great day and a very enjoyable competition. 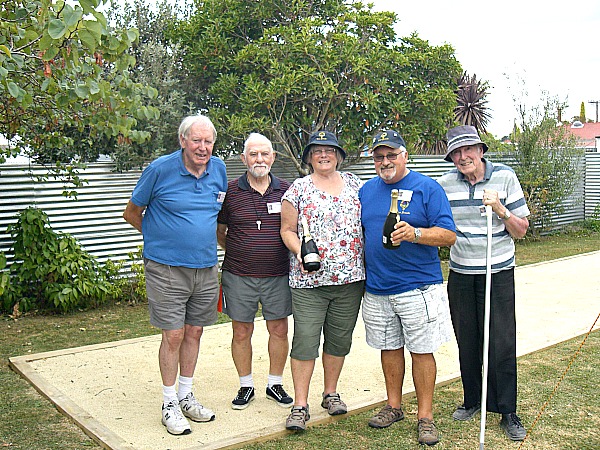 The winning Parker team in the centre, flanked by Bruce McGechan and Don Ellis on the left, and Doug McGechan on the right. 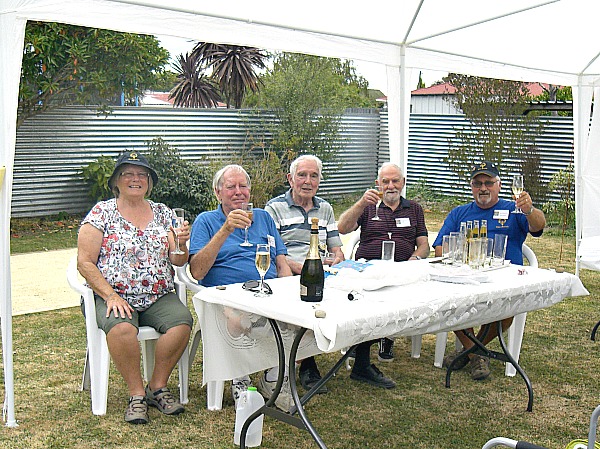 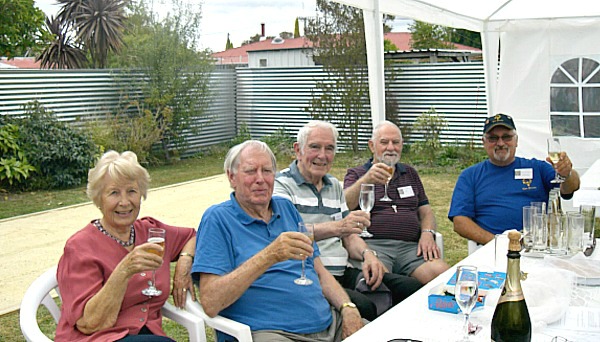 It was another beautiful Summer’s day for the Paeroa Highland Games on Saturday the 8th of February 2020.

As it was such a glorious day the crowds turned up early for the usual programme of piping, Highland Dancing and the many field events which included events for children. 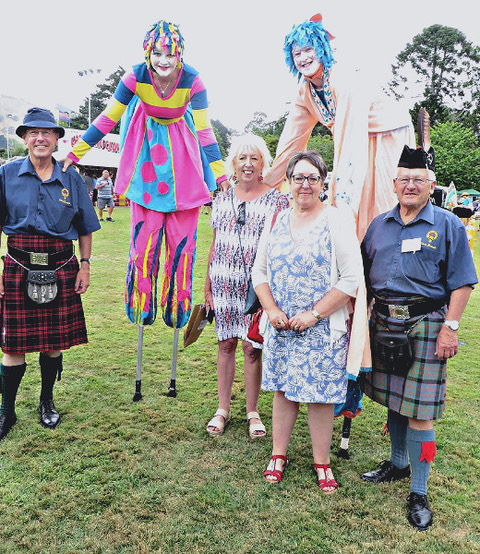 High Commissioner Alan MacDonald and the North Island Commissioner Tom McDonald with Beryl and Fiona being overshadowed by the two girls on stilts.

During the afternoon there was the pipe band contest, and the Domain was ideal as spectators could sit in the shade of the many trees while listening to the bands.

There were 19 clans present in the Avenue of Clans, and Clan Donald had many of the committee and members present including the President Barrie Paterson and his wife Annette. The Patron Murdock McDonald also had his daughters Fiona and Beryl on site plus Jim and Ella Donald, Jim Murdoch and Ann Marshall. The Clan Donald High Commissioner Alan MacDonald as well as the North Island Commissioner Tom McDonald and his wife Lynnette.

At 10.30 am, the Clan’s March, instead of marching to the town centre and back, took a short route, led by the Thames Valley Pipe Band through the castle gate to assemble behind the official party in front of the grandstand. The Opening Ceremony started with everyone singing the unofficial Scottish anthem “The Flower of Scotland.” 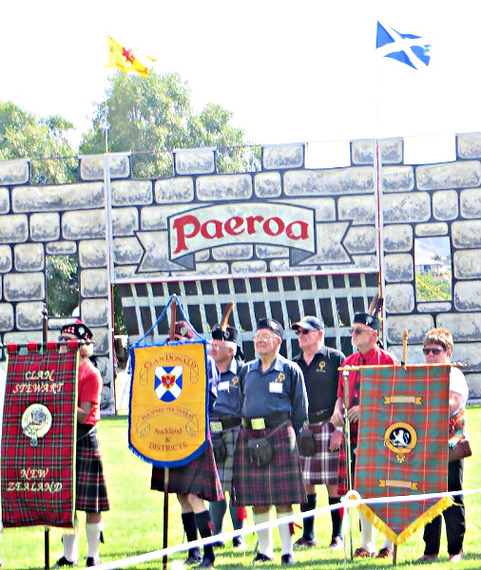 The Clan Donald Colour Party behind the yellow banner.

During the hot afternoon the Clan Donald Pavilion had many members and friends visiting for refreshments. 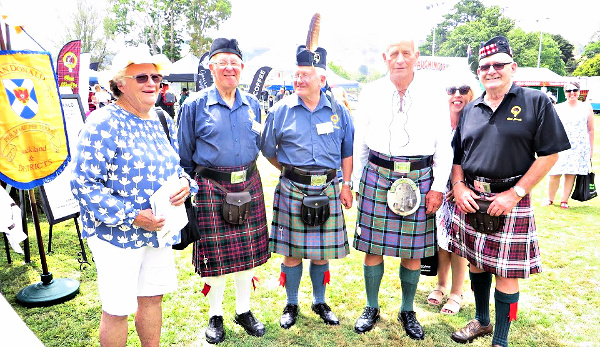 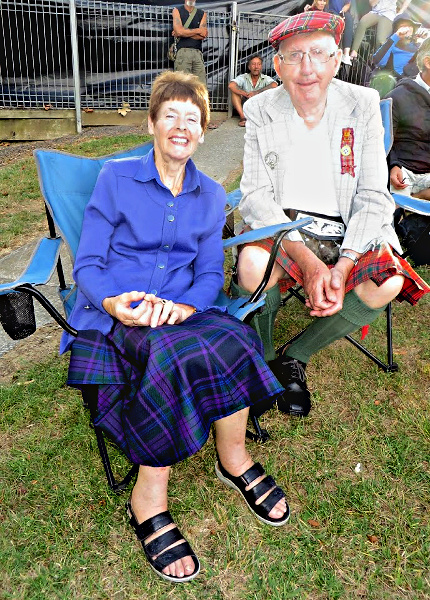 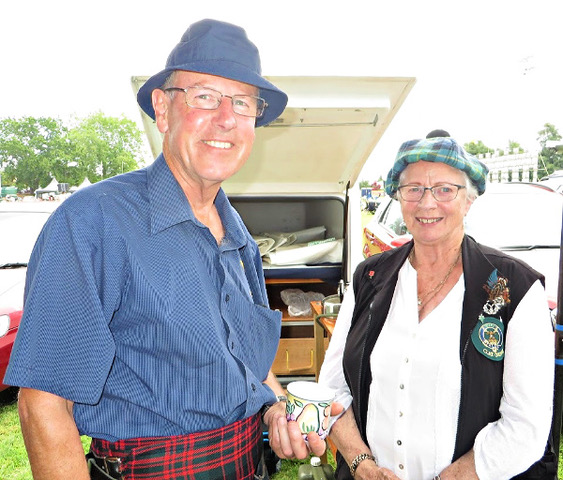 At the end of the pipe band contest the bands had the usual Street March through the town and into the Domain for the evening Tattoo.

There were 13 pipe bands in the Tattoo, which a very large crowd enjoyed, and many Clan Donald members gathered on the grassy knoll for the entertainment. 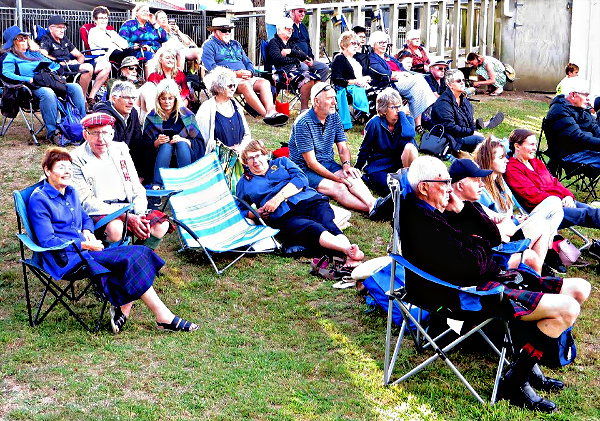 Clan Donald members on the grassy knoll during the Tattoo.

A great day was finished with everyone singing Auld Lang Syne.

Saturday the 25th of January was very hot and sunny, but with a blustery breeze, which unfortunately became quite windy in the afternoon.

The avenue of clans unfortunately suffered the most from the wind in the afternoon as the avenue was on the south side of the Turakina Domain. 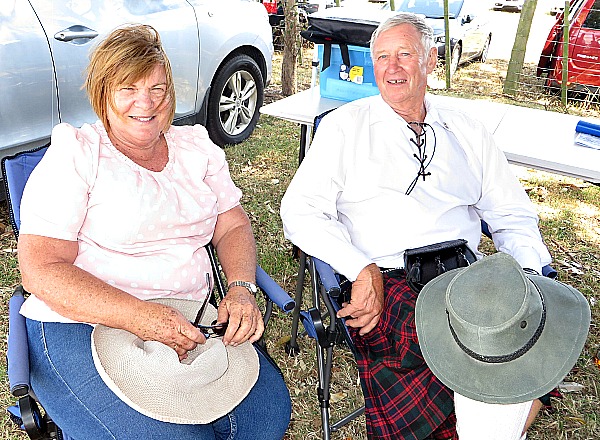 Hillary and David Moore, President of Clan Donald Wellington, with their hats that were needed on such a sunny day. 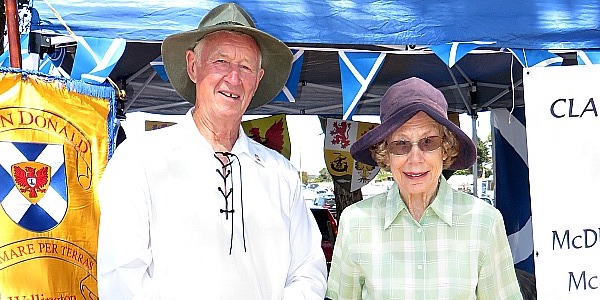 David Moore and Carol MacKay in front of the Clan Donald Wellington tent. 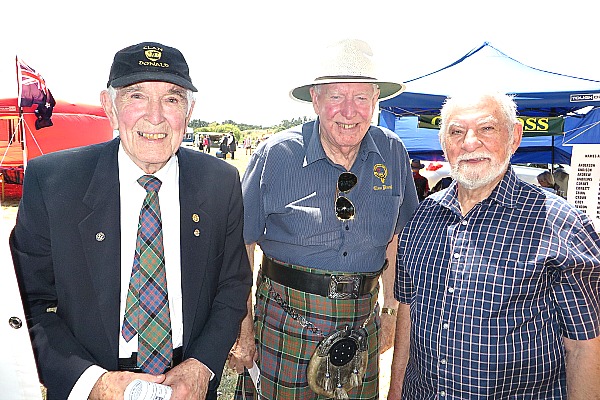 The Turakina Highland Games is the oldest in New Zealand being established in 1864. It has in recent years grown to be the largest as well. The Turakina Domain was almost at bursting point with a very large crowd, and the centre of the grounds was also crowded with a great range of commercial stalls.

There was a great range of Highland dancing competitions covering both the North Island and Wellington Centre Championships.

At 12.30pm there was the Clans March led by the combined pipe bands of Rangitikei, Manawatu, Horowhenua, and Wanganui. Unfortunately, with such a large crowd and the centre of the grounds crowded with commercial stalls, the Clans March had difficulty completing the circuit. 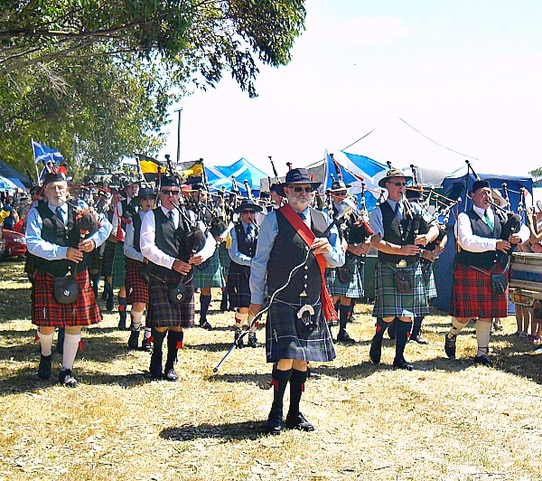 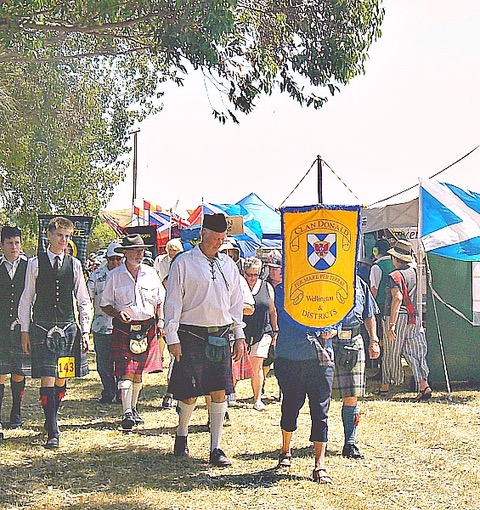 In the centre David Moore and Lynnette McDonald carrying the banner with Tom McDonald the North Island Commissioner obscured.

In the afternoon there was the first Pipe Band Competition of the season with 11 bands competing from Wellington, Manawatu, Hawke’s Bay and Rotorua, and ranging from Grade 4 to Grade 1.

A new initiative was the “Have a Go” sessions. People were invited to try “Bagpiping,” “Scottish Drumming,” and “Mace Flourishing.” 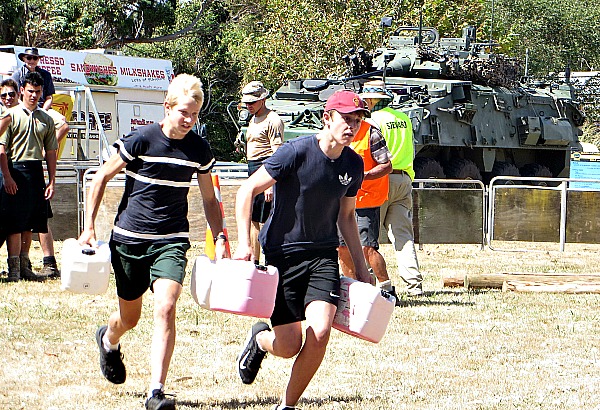 Some of the members of the West Coast Regiment watching competitors in the Heavyweight event.

At around 5pm there was the massed band display followed by the traditional Scottish Haggis ceremony before the Prizegiving.

In the evening there was a ceilidh with music by the band Bowmore.