Clan Donald Hawkes Bay held its annual Scottish dinner on 7 July 2018 at the Community Centre in Havelock North. The event was attended by 34 people including local Clan Donald members, members of the Auckland, Wellington and Canterbury Societies, and others who enjoyed the Scottish atmosphere and entertainment. 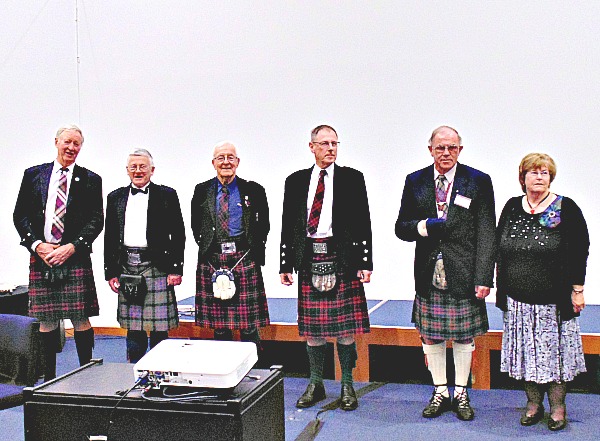 The evening commenced with a cleansing draft for all guests of Athol Brose, which had been specially prepared by Hawkes Bay President David McDonald according to an ancient Scottish recipe. We then moved on to a traditional Haggis ceremony, with the Haggis being addressed by David McDonald. 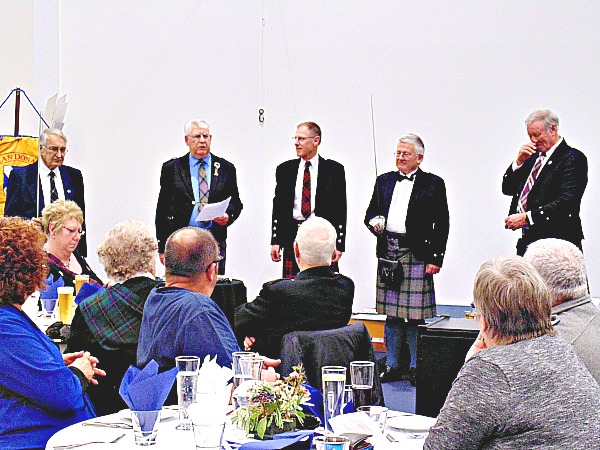 Clan Donald Hawkes Bay’s Piper Maurice Chisnall, piped the Haggis and later in the evening played an extended bracket of pipe music, much to the delight of those present. Maurice is also the Pipe Major of the City of Hastings Pipe Band, and the Clan Donald Hawkes Bay counts itself very lucky that he makes himself available for occasions such as this. His piping was certainly the high point of the evening. 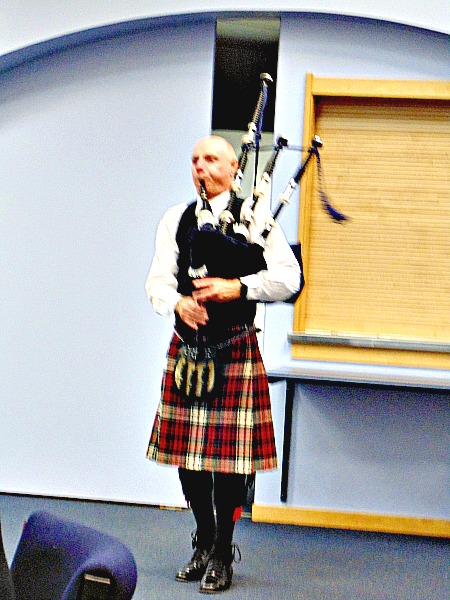 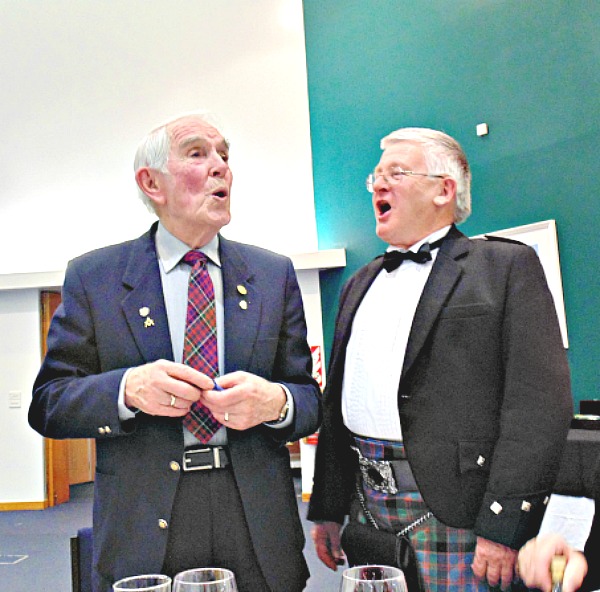 Doug McGechan from Hawkes Bay and Tom McDonald from Auckland singing the Scottish Anthem “The Flower of Scotland.” 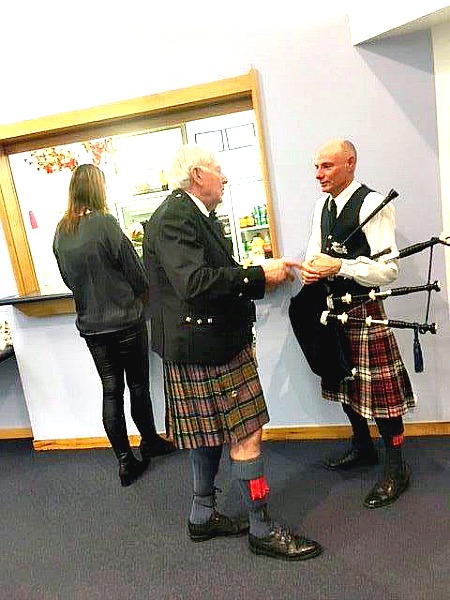 Bruce McGechan having a chat with Maurice Chisnall about pipe music and pipe bands. 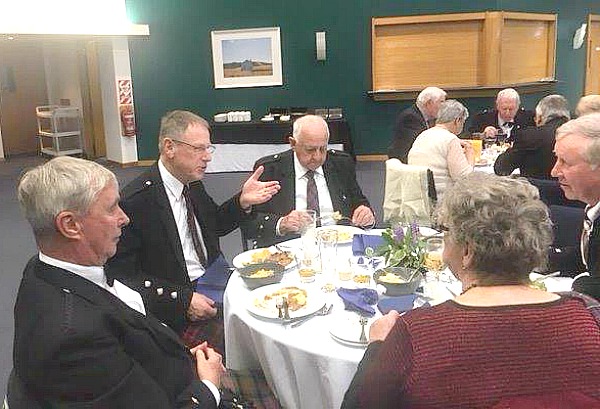 From the left John McKechnie, Alan MacDonald, Murdock McDonald, Trish McKechnie and David Moore having a good discussion over dinner. 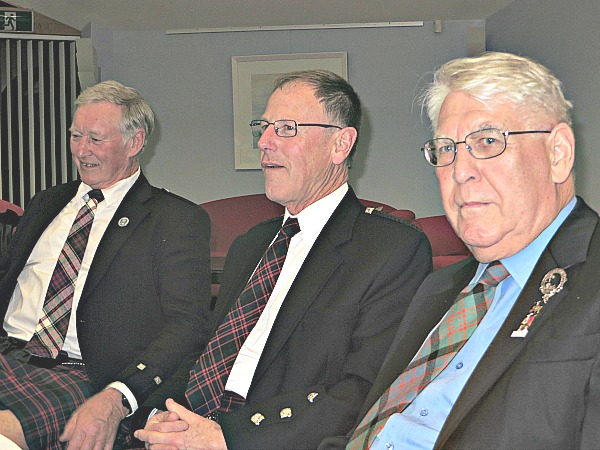 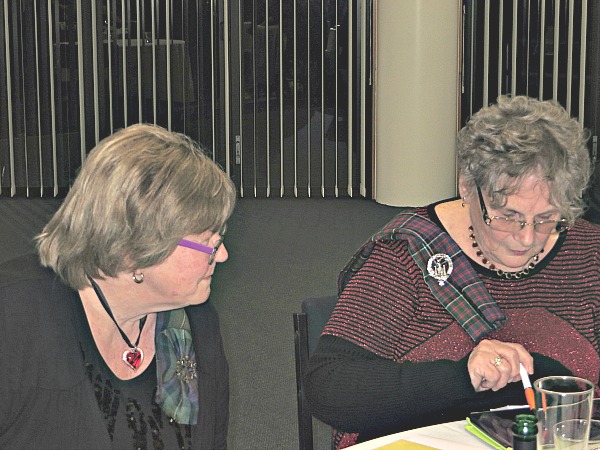 New Zealand President Christine Martin and Secretary/Treasurer Trish McKechnie discussing a point during the meeting after the dinner.

On the following morning, Sunday 8th July 2018, a Kirking of the Tartan service was held as part of the regular Sunday morning service at St Columba’s Presbyterian Church in Havelock North, which was attended by Elwyn and Christine Martin, Tom and Lynnette McDonald, John and Trish McKechnie, David and Jill McDonald and David Moore, with an informal lunch to follow at the local pub. As always, the congregation and the Minister at St Columba’s were very welcoming to the Clan Donald contingent and fully participated in the Kirking of the Tartan, with Clan tartans being brought to the front of the church and laid on the Communion Table. The Minister, interim Moderator Craig Kilgour wore his kilt for the occasion, and adapted the service to fit in with the theme. As part of the service “Flower of Scotland” was sung by the congregation, accompanied on the pipes by Piper Graeme Buchanan. After the service the leftover Haggis was served up to all present, and was much appreciated. 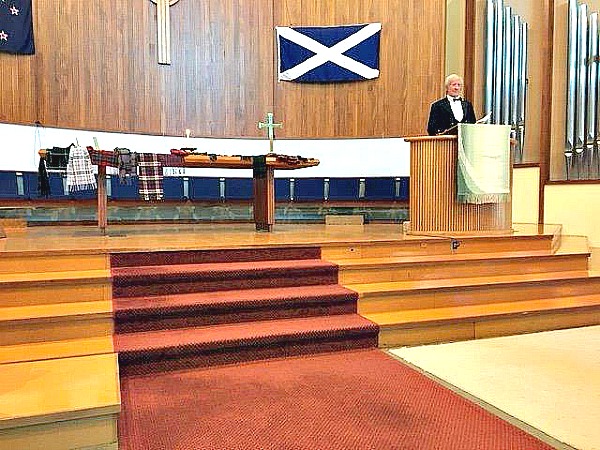 Minister Craig Kilgour in the pulpit at the Kirking of the Tartan, and showing the Communion Table with Clan Tartans placed on it. 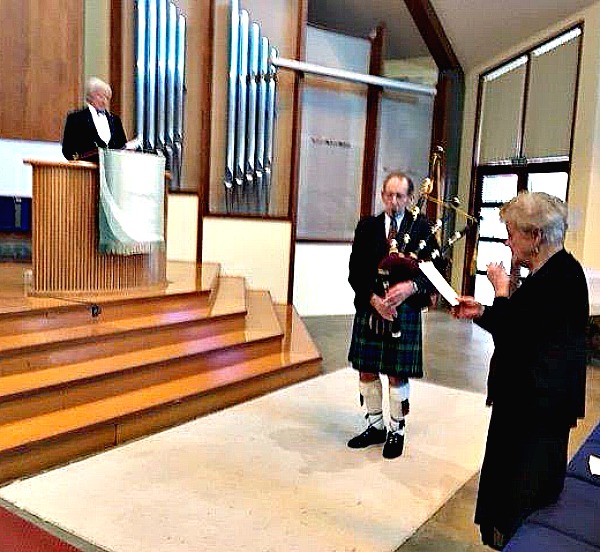 Piper Graeme Buchnan playing at the Kirking of the Tartan. Minister Craig Kilgour in the pulpit.

All in all, it was a very successful weekend, and Clan Donald Hawkes Bay thanks all those who took the time to visit Hawkes Bay to participate. It would certainly not have been the same without you.